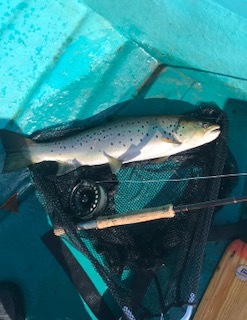 Basically when I arrived the first thing I noticed was the lake was higher than I have ever seen it.  It was to my surprise a flat calm so I spent a while trawling around to see if there was anything happening.  Around 12 the wind came up and it started to warm up slightly.

I had my Minkie on the point, my Golden Dabbler on the middle and the famous Bann Valley Leggy Green Peter up top I wanted to see how it preformed as an early season pattern. Joe from the local tackle shop in Irvinstown had said it will work fom him early on.

First drift was a very exposed island and I was casting flies right up into the shore where it is normally dry land, and bang, what I thought was a nice trout of a couple of pounds turned out to be a really cracking fish on the top dropper.  The Peter did the trick. 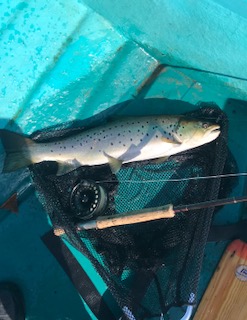 I had a good 10 min scrap with this fish. It went to about 20ft of water and just sat their until I brought the boat around and got him going again.

After this I turned around and went back onto the same drift. Around the same area I threw my flies in and had to turn around to sort something with the engine.  I got stuck on what I thought was the stones and gave it a good wig to free it and to my surprize the lines started running off the reel.  I had another really nice trout. 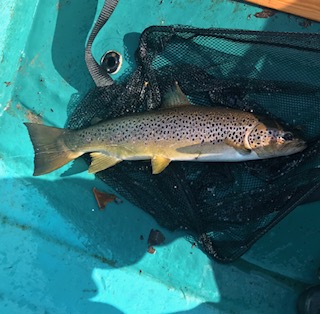 This time he was slightly bigger than the first one so around the 4lbs mark. It is amazing to see the difference in the 2 fish. The first one was almost silvery and no red spots and the second as you can see is more typical brown trout markings.

When they came into the boat they both had been eating a green coloured shrimp so stands to reason the Peter was the right shape and colour to do the business.  If your on Erne early you will find the duck fly can be small and fish feed nearly exclusivly on shrimps and crustations.  Some will feed on fry and so on opportunistically but shrimps in around the shores seem to be consistant. 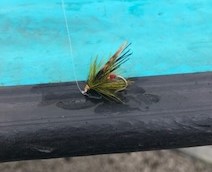 I fished on for another half an hour and turned another fish to a golden dabbler then had to head for the hills as I had some family commitments with my lads.   Thats what I love about fishing.  If you stick at it you never known when you will be surprized with the results.  Sometimes better than you would have expected.

Keep in touch with our fly club at.